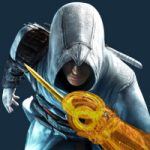 Like my avatar suggests, I'm a huge Assassin's Creed fan but it doesn't compare to my love of Mass Effect. If I could mix these two games together and have an Altair Shepard that can free-run and use biotics, I'd be in heaven.

I've always tweaked the wiki pages every now and then anonymously until I found out registering would disable the ads. My mind is finally clearer without the constant reminders to buy tampons and gravy.

I've been adding a few pictures to this wiki and making occasional edits. Mass Effect is unlike any other game out there and I've come to really enjoy it. My de facto Shepard is a male vanguard colonist war hero that I've been playing with since the first game. I've finished ME3 with this character now and I've got to say it was bittersweet. Like many others, I felt the ending was a little rushed and I was hoping for a lot of little blue children. But, always being the paragon, I decided to pick the blue ending.

"So, there are these two hydrogen atoms and they're talking. One says to the other, 'Hey, I lost my electron!' And then the other one says, 'Really? Are you sure about that?' And then the first hydrogen atom says, 'Yeah...I'm positive!' Hahaha!"
-Joking Scientist

Liara: "Their attacks are disorganized. They'd be more effective if they all attacked at once."
Shepard: "Please don't give the mercs ideas."

Javik: "His speech is strange."
Mordin: "A Prothean. Excellent."

Retrieved from "https://masseffect.fandom.com/wiki/User:Freakium?oldid=286544"
Community content is available under CC-BY-SA unless otherwise noted.