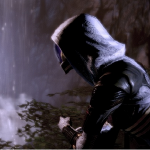 (Mr. Braithwaite, in Enter The Dragon)

Hi! As the name suggests, I love Tali. But please don't take it too seriously, I aim to be a level-headed and unbiased editor; the name is simply my way of expressing myself. I love everything about the Mass Effect games; the first two anyway. Complaints about the 3rd game can be found later...

I can credit a friend of mine for introducing me to Mass Effect, he's a big fan too and thanks to him, I have become quite obsessed with the whole Mass Effect Universe.

I would recommend the following Mass Effect fanfiction from www.fanfiction.net to anyone interested: "An Unfortunate Mix Up"(HIGHLY RECOMMENDED) by "Insane Guy of DOOM", anything by "InHarmsWay", "Loss" by "Stickki" and anything by "ElectricZ". And also my best friend's own Metroid crossover fanfic: "Primed To Defend The Universe".

I am a half Chinese student, mainly interested in Biology and Geography, and I'm very proud to have Asian roots. I have interests in martial arts, martial arts movies, writing, History, Mandopop, Cantopop, K-Pop and believe it or not, Classical Music.

I shall do whatever I can to improve this Wiki, but will be happy to discuss anything that may not be agreed with.

The Mass Effect games have so many great lines, that I cannot help but feel the need to note down some of my favourites from numerous characters. Feel free to post on my talk page any quotes you think should be included. Do note that there isn't much point in noting down dialogue included on character/unique dialogue pages, although I will make some exceptions. These quotes are listed from memory, so they may not be correct word for word. Most should be instantly recognisable, but tell me if I've made any definite mistakes.

Disclaimer: The following quoted Mass Effect lines are the work of Bioware. No copyright infringement intended.

Note: I was originally gonna do quotes from most of the main characters, and across all their appearances, but I'm too busy these days and really can't be bothered now. :P

(If Garrus says "old times" at some other point, feel free to inform me)

Note: Garrus has so many awesome quotes. I think him and Zaeed compete for the best dialogue in the game.

Note: Harbinger's quotes are all in italics and none have exclamation marks because...well, it's a Reaper.

Note: Legion's quotes – like Harbinger's – are also in italics, but unlike the Reaper's, do include exclamation marks since I think it is capable of greater expression.

Note: the quote corner is technically not yet finished and probably never will be. >_<

My Least Favourite Things (i.e. problems with ME3) Edit

Retrieved from "https://masseffect.fandom.com/wiki/User:Tali%27s_no.1_fan?oldid=398332"
Community content is available under CC-BY-SA unless otherwise noted.