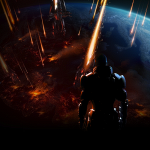 My name is Michael, and I am an avid console gamer. Back in 2007 a good friend of mine recommended the game Mass Effect to me, and I was extremely skeptical at first. I looked into the game a bit, watching trailers and reading reviews and was unconvinced about its quality. It was then gifted to me during christmas, where I played for about a day, dazed and confused before putting it down for five months. When I finally came back to the game, having figured out what to do, I fell in love with it. Mass Effect was the first game I ever attained 100% completion for on the Xbox 360. With the release of Mass Effect 3, I am very excited to say that I will be helping out as much as possible to update the Wiki with relevant information from the game.

Objective: Find and document procurement information for the armor pieces available to players.

Once again, with the help of -S-, we've gone about adding all images for the armor pieces. After cropping, enhancing the lighting, and integrating them into the article this morning, we're almost done. All that is left to do is find out where the pieces are found. — The Primarch «-•-» 17:32, March 14, 2012 (UTC)>

Objective: Maintain a readable layout while promoting completion of the article and adding to it.

The Morality Guide is moving along swimmingly, with additions almost daily. I'm still waiting for an answer regarding the organization of the article, which is curious because those with more say than I do are currently dealing with trivial matters in comparison. I'm hoping that they answer me soon, but in the mean time, I shall continue to add what I can. — The Primarch «-•-» 17:32, March 14, 2012 (UTC)

Retrieved from "https://masseffect.fandom.com/wiki/User:The_Primarch?oldid=268281"
Community content is available under CC-BY-SA unless otherwise noted.