Well, I was reading an article on IGN today, and thought I'd weigh in on the soon-to-be-released Mass Effect Trilogy. 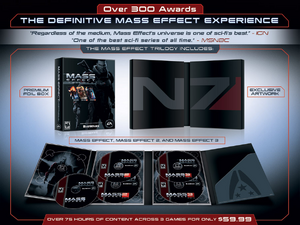 First off, I will say it's a hell of a deal. Let it never be said that anyone who pays 60 dollars for three great games is getting ripped off. I do have some qualms with the so-called compilation, not because it's a bad bargain, but because it could have been a lot better-and the fans deserve better, after all that BioWare puts them through.

My main beef with the Mass Effect Trilogy Compilation is how it skimps on downloadable content. The links above will take you to their respective wiki articles, to get you up to speed if you aren't privy to what add-ons are included and excluded. More than anything, it's very curious that BioWare/EA would decide to release a compilation so early in the third game's DLC cycle, a possible indication that they are getting desperate for sales. In fact, it reminds me somewhat of the revision for the Skyrim Game Guide; both were released after two pieces of DLC were added, and both will be made quickly obsolete by the immenent add-ons that will soon be made available. Like Prima’s Revised & Expanded Skyrim Game Guide, this compilation doesn't feel at all complete. It feels like we're getting jipped, when we know they could have easily waited for the game to run its course and give us more bang for our buck. What seems even more odd is how they seemingly picked the DLC by random. Different platforms get different downloadable content, with Mass Effect 3's being somewhat lacking, due to them jumping the gun.

And the gun has certainly been jumped.

I use this expression because it feels odd to release this kind of collection so early. These kinds of things are typically reserved for (or at least they should be) the end of a series, when all instalments have been out for some length of time. LucasFilm released Indiana Jones: The Complete Adventures a full four years after the last movie came out, giving plenty of time to put in a plethora of special features. Not only that, but it was a great deal, giving us three amazing movies and a free drink coaster! To release the trilogy now, before Mass Effect 3 can even run its course, seems a bit... tacky. The myriad of missing content will always make this feel incomplete; it's a bit of a missed opportunity.

Or is it? Let's be honest. This won't be the true, final compilation for the original Mass Effect trilogy. This is likely nothing more than a quick cash-in. You can bet that once more downloadable content is created for Mass Effect 3, we will see another collection. Whether it is actually complete, and contains all the content such that it be worthy of being titled "complete" or "definitive" remains to be seen. For a company already on very thin ice, this doesn't sound like a sound idea. 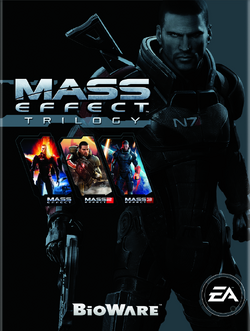 Truthfully, I'm a little disappointed in BioWare. After their many, many mistakes, it seems a little brazen to release a trilogy pack so soon. Once again, I feel as though BioWare doesn't have its priorities straight, and it shows. A compilation should be a chance to look back with a bit of nostalgia on a series that has been brought to a close, not a quick cash-in. As a PS3 owner, I have been treated to some excellent HD collections: the Ratchet and Clank Collection, Jak and Daxter Collection, and Sly Cooper Collection are all great deals that give me a chance to explore those trilogies with the benefit of retrospect and nostalgia. Those collections are all done; they won't really be more complete than they are now. The Mass Effect Trilogy is incomplete from the get-go, due to different DLC additions not being added to certain editions. Not only that, it's being released a mere 8 months after the final instalment came out. I'm not done experiencing all the story arcs in Mass Effect 3; why would I want to buy a collection that's incomplete?

Retrieved from "https://masseffect.fandom.com/wiki/User_blog:The_Milkman/The_Definitive_Mass_Effect_Experience%3F?oldid=364008"
Community content is available under CC-BY-SA unless otherwise noted.