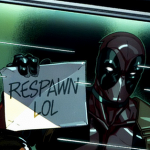 Hi, welcome to Mass Effect Wiki! Thanks for your edit to the User blog:DeadpoolN7/Anyone Else Think Javik is the best character in terms of dialogu page.

Be sure to check out our Style Guide and Community Guidelines to help you get started, and please leave a message on my talk page if I can help with anything! -- Commdor (Talk) 15:36, October 12, 2012

Good day. I noticed your response on my comment about Mass Effect 4. Finally,someone that agrees with me. Although I am a new arrival in the series(1 month) I have played all of the games. I watched as the series became more and more like Gears of War. In Mass Effect combat was slow-it was great. Lots of story. ME2-far more action,less dialogue. ME3- the dialogue tree has 2-3 options. It was full in the original. Combat was 75 percent of the time. And yet I bought all three games with all the DLC possible and out to this date.Why? Because of Shepard-the ultimate badass,better even than Chuck Norris. He saved the galaxy 3 times and he(I) made some tough choices. But all good things come to an end. I wanted to punch my PC when i saw the ending of ME3. I waited and I was trolled a few monts until the Extended cut DLC-same sh*t,just MOAR of it. My decisions ultimetly didn't matter. Now i hear of a new game. What is there left for a story? Reapers are gone. They were the foundation. A prequel? What is there for a prequel. Given that those A-holes at BioWare told to keep our save-files I guess it would be a sequel. What kind of a sequel? Happy galaxy,peace and bunny rabbits everywhere. The Mass Effect series is EXHAUSTED in terms of story. I will not help BioWare any more in their quest for money-no ME4 4 me. What do you think the game will be?--Sightmark (talk) 15:26, October 18, 2012 (UTC)

NP about the delayed response. The franchise is exhausted to the max. Now I feel...betrayed by those A-holes. Here in Bulgaria the game is 80 leva+DLC=150 leva= a lot. And thats just the third game. BTW Tali is the best romance ever,but rather sadly, she is also a video game character. My PC has a dent on its side. Wanna guess why? You guessed it,you guessed it, ME3 ending. I spent 3 hours fighting for her homeworld and the ending had no closure about it. And her "face". Had to buy a new keyboard for that one. My RAGE MODE is like that of a krogan. Those A-holes just took a picture from Google Images+ Photoshop= NJOY, stupid fans,Trolololo.--Sightmark (talk) 18:30, October 19, 2012 (UTC)

Also,would care to join the chat to speed up communication? BTW you wanna know the future of this BROKEN game? Just like Battlefield 3- Base game,shitload of DLC, A service with all of the DLC, Everything in one. Broken. EA know how to ruin a game. BTW I am Banned on BioWare forums for reasons you probably guessed by now.--Sightmark (talk) 18:36, October 19, 2012 (UTC)

Hello, Deadpool. I will ask you a question, if I may. Given the evolution, or rather deevolution of the series, what are your hopes and expectations for ME4?--Sightmark (talk) 14:24, October 22, 2012 (UTC)

Hey. Just wanted to let you know that your username is awesome. Have you seen the trailers and info for the Deadpool game that's coming? Hefe (talk) 20:53, March 6, 2013 (UTC)

Hey, thanks man! Of course I've seen it. I'm so excited for it for the most part. However, I have heard rumor in the dark corners of comic conventions that the game will act as the movie's replacement because Reynolds no longer has time or true interest in making the movie. If that's the case then I am saddened! The trailer does look quite good though!--DeadpoolN7 (talk) 14:17, March 15, 2013 (UTC)deadpoolN7

Dunno if you have seen them my friend but there is a new trailer and plenty of screenshots out now that show more of the game, including guest spots from Cable and Psylocke and a visit to Genosha. Garhdo (talk) 14:26, March 15, 2013 (UTC)

Retrieved from "https://masseffect.fandom.com/wiki/User_talk:DeadpoolN7?oldid=396442"
Community content is available under CC-BY-SA unless otherwise noted.