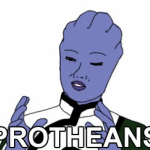 Hi, welcome to Mass Effect Wiki! Thanks for your edit to the Talk:Rachni page.

Be sure to check out our Style Guide and Community Guidelines to help you get started, and please leave a message on my talk page if I can help with anything! -- DRY (Talk) 16:48, 31 May 2010

"Did it occur to you that at the time, there had been little evidence to report the bug? From your summary, I'm guessing not."

First of all, your snide, snippy tone is completely uncalled for. Second of all, I have no idea what your talking about. When I first posted the note about the bug weeks ago, you reverted it, saying that bugs need confirmation. Alright, fine. I post a topic on that planet's talk page, asking if anyone else had the same issue. Multiple people have. There's my evidence. TheUnknown285 15:36, April 3, 2012 (UTC)

As I ask users at the top of my talk page, I ask users to respond to messages that I leave them on their talk page. I also state that I will remove the message and respost it.
As to the point, I state that at the time there was no evidence, yet your summary is rude becuase of how you did it. You could have simply readded the information, yet you did not. Lancer1289 15:42, April 3, 2012 (UTC)

I reverted your edit because it was quicker to do it that way. My summary was simply noting that we now have confirmation of the bug. TheUnknown285 15:45, April 3, 2012 (UTC)

The trivia seems valid to me. As TheUnknwon285 states, it's reference trivia with obvious parallels. And I definitely found it interesting. Seems worthy of inclusion, IMO. SpartHawg948 (talk) 03:07, January 8, 2013 (UTC)

All right then. Since people at the chat vote apparently thought we aren't user-friendly enough, I have decided to step up to the mantle, hence these talk page messages. 4Ferelden (talk) 03:10, January 8, 2013 (UTC)

I have to admit that the vandal that you just report made me laugh ;)

Hello. Since you have your email preferences turned off, could you please email me using this tool at your earliest convenience? There is a private matter I would like to discuss with you. -- Commdor (Talk) 00:38, February 27, 2013 (UTC)

I noticed some minor errors in your sandbox, but I was unsure whether I would be able to edit it since it belongs to you otherwise I would make the corrections myself.

Thanks for catching those. I'm in the process of making those changes to the list.The one about the Century System is especially interesting. That would mean the Hawking Eta cluster has three relays: the one in Century, the one in Chandrasekhar, and the Mu Relay. The Mu Relay is easily explained as it was blown from its original location. For the other two, I'm wondering if that's an error.

As for editing the list yourself, it's probably a good thing you didn't. While I wouldn't have minded considering you were right, I know that editing other users' comments or their profiles is against the wiki's rules (even if done with good intentions). I'd imagine it's the same way with sandbox pages. However, when I'm done with the list (after adding the ME3 relays), it'll be posted to the existing mass relay page, where anyone is free to edit it. In the meantime, though, if you find any more errors or any missed relays (like those mentioned in Codex entries), please let me know. Thanks again. TheUnknown285 (talk) 23:29, March 29, 2013 (UTC)

As mentioned in Mass Effect, Arcturus Station has several mass relays in its location (which is mentioned under Function in the article). So it is possible that there is more than two mass relay in a star cluster and these certain mass relays connect to locations that others do not. Anyway, your welcome and if I see any other errors I will alert you. 71.184.225.72 23:55, March 29, 2013 (UTC)

As you can see, your proposal was discussed (http://masseffect.wikia.com/wiki/Forum:Alpha_Centauri_article) and it seems that the community have found a compromise :

I'm really happy with the discussion about this topic, it seems that the community is becoming once more friendly and ready for compromise rather than antagonistic. And btw, nice job on this new article ;)--DeldiRe 07:51, June 7, 2013 (UTC)

As one of the few currently active editors, could you give your opinion on this topic please ? Thanks in advance --DeldiRe (talk) 14:54, September 19, 2013 (UTC)

Not sure what you want to do with the cut contents.
If you want to extract the audio dialogs, you will find the files in:
Mass Effect\BioGame\CookedPC\Packages\ISACT
You can extract the files with Psychonauts Explorer:
http://quickandeasysoftware.net/software/psychonauts-explorer
Molator (talk) 16:23, March 14, 2014 (UTC)

Thanks. I have a sandbox that I've been using as a repository for bits of deleted and altered ME1 information. Unfortunately, I'm not sure I would be able to extract files myself as it's something I've never done before and I have the 360 version. TheUnknown285 (talk) 23:19, March 14, 2014 (UTC)

Good to hear, don't forget that a solution could be to more specific about the requirements of a character to deserve his/her own page. In that solution we could be less restrictive (but more than in some wikis). --DeldiRe (talk) 11:48, September 12, 2014 (UTC)

Yeah, I was actually going to table a lot of the tangential and future issues that have been talked about for now in favor of dealing with more pressing issues. I'm taking a week off of work next week, so I'll hopefully have more time and energy to do some editing. TheUnknown285 (talk) 19:24, September 12, 2014 (UTC)

About the Enemy pages. Edit

This is really minor: I noticed on your sandbox that there were a few variations of the name "Bilal Osoba" (e.g. Billial, Bilial). I'm sure you would have caught them when you next edited, but I thought I'd mention it just in case. -Sophia (talk) 18:33, November 23, 2014 (UTC)

since you're already generating location articles as fast as possible Edit

might as well update Cluster:Heleus Cluster while you're at it. the syntax is easy enough to understand. T̴̴͕̲̞̳̖̼̱͒͛̎͒ͫ̃ͧeͩ̈̽̈҉͓̝̰̼̦̫̤̀͠m̫̪̪̯̻͎̫̅̇̓̇͌̚p̸̙̝̓̓͌ͨ͆ͣͥ̂̕o͒̽͐̽͏̞̬̻͕͔͕͚̰͍͠͞ṙ̢̞͚͈̹̰ͨ̓ͭ̈́̌ạ̢̧̪̹̺̺̣̹̲͂͆̏ͪͨ͒ͭř̹͈͜͠y̷͍̻̜̹̼̾̽̈́e̵̹̼̟̦͚͐̈́͌͘d͉̲̣̻͉̱͗̅ḭ̷̻̆͋̆̓̔͝t̨͍̦̫̗͂̅̍̋̆ͩ͝ộ̫̟̬̳̝̲̾ͫ̒̿ͮ̑̚rͯ̎ͨͭ̄̿̽͛҉̠̫̱̠̘̘̲́ͅ7̩̻ͤͩͨ͝͡8̜̣̙͇̻ͨ͛͛̆͒̆̽̒͐͜͡ ͥ̍̉̃̇ͥ̓ͨ͏̕҉̥̹͓̗̤̠̖̤ (talk) 09:10, March 11, 2017 (UTC)

I noticed on a bunch of the pages you created, specifically some of the adversary ones, you hyperlinked the first instance of the page's name for instance on Anointed page it started with:
The Anointed is a kett unit type...
I'm not sure why you would hyperlink a word to the same page that the word is on, the word should follow the style guide and be bold instead.AnuChemicalCo (talk) 00:50, April 30, 2017 (UTC)

I just though about this response that would have been awesome to put into the undo response. "No. Jacob Taylor doesn't suck. Your stated trivia is therefore false." :) But then Temp78 would tell me to stop antagonizing the vandals with an undo edit war. -- GS877 (talk) 06:21, February 27, 2018 (UTC)

Retrieved from "https://masseffect.fandom.com/wiki/User_talk:TheUnknown285?oldid=493328"
Community content is available under CC-BY-SA unless otherwise noted.