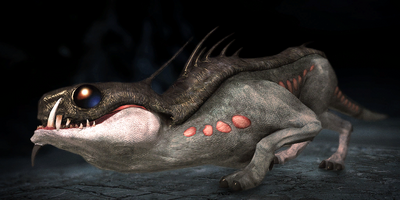 Varren are omnivores with a preference for living prey. Originally native to the krogan homeworld of Tuchanka, they are—like most life from Tuchanka—savage, clannish, and consummate survivors. They are pack hunters when vulnerable prey is readily available and become scavengers when outnumbered or outclassed. Their supreme adaptability, vicious demeanor and rapid breeding cycle have made them ubiquitous and dangerous pests on many worlds. Virtually everywhere the krogan have been, varren infestations have followed, wreaking havoc with the native ecology.

The krogan have had a love-hate relationship with varren for millennia, alternately fighting them for territory and embracing them as treasured companions. To this day, krogan—and some other species, including batarians—raise them as beasts of war. A common subgenus of varren has metallic silver scales, leading to the rather unusual nickname 'fishdogs'. 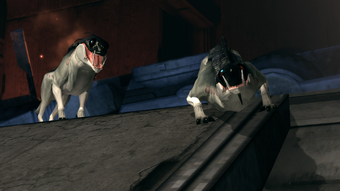 Varren thrive on many worlds and in various environments, including the Prothean ruins on Feros. Humans, at least, are capable of consuming and drawing sustenance from varren meat. Commander Shepard is asked to kill a rabid alpha varren in order to permit the Zhu's Hope colonists to hunt the remaining varren. Davin Reynolds didn't just see the animals as a convenient larder, either. Apparently varren are so vicious they'll even take on the geth.

Bring Down the Sky

The batarians who attacked Asteroid X57 set packs of "Batarian War Beasts" on the engineers there (not to mention Shepard and the squad). Simon Atwell hated the sight of them, claiming varren don't always wait for someone to be dead before they start eating.

One of the varren alongside Balak displays jaw articulation similar to that of a snake, suggesting that varren are capable of swallowing prey whole.

Aside from being a common enemy found throughout Shepard's travels, a single varren, Urz, can be found standing patiently next to Ratch on Tuchanka. Shepard is allowed to pet the varren, who responds in a surprisingly tame and almost dog-like manner. Should Shepard give the varren some pyjak meat that can be purchased from the trader Ratch, the varren will happily follow Shepard around Clan Urdnot's encampment. The trader notes that the varren "finally has someone to follow around". This particular varren is actually a retired champion of the fighting pits and can be wagered upon with a purse of 500 credits.

A sexually transmitted disease known as "scale-itch" that is carried only by varren can be detected aboard the Normandy during one of the chats with Mordin Solus; he will be seen at his lab combating the infection and notes that the implications of it are "unpleasant," euphemistically insinuating that someone aboard has been having sexual relations with varren.

Varren are apparently a popular food source, as advertisements of a "Fishdog Food Shack," which serves varren skewers as well as varren steaks, can be heard on Illium.

During the Cerberus assault on Sur'Kesh at one point when Shepard opens a door, a varren is seen killing a Cerberus Assault Trooper before being gunned down. A voice is then heard warning against live varren gotten loose.

An STG computer terminal reveals that the salarians have been considering using the varren (designated "species 408") as biological weapons.

Further indications of varren as a food source can be heard in Citadel advertisements for McSorley's Cloaca Margarine, allegedly made from free-range "organic" varren. 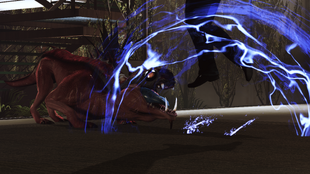 According to Jack, varren on Thessia can develop biotics due to the amount of element zero in the planet's ecosystem. Their biotic abilities can make varren even more aggressive and short-tempered, which often leads to their abuse and abandonment. Jack adopts one such varren, a red-skinned variant whom she names Eezo.

Varren pit fights aren't the only sport these creatures compete in; they can also be trained to race against other varren for their owners' amusement and profit. Professional varren racers eat a special diet based on what they get in the wild, minus radioactive contaminants, and are forbidden to eat body parts of sapient races like krogan. Races are less violent than pit fights, although on occasion varren do try to subdue each other by biting throats without actually piercing skin. There are, however, incidents where races do devolve into fights that end up with mutilated varren.