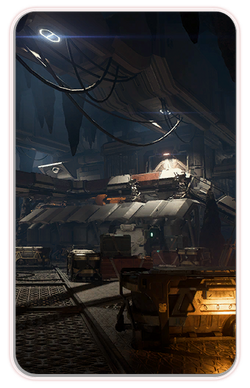 Vetra's sister, Sid, is waiting for a call from you and Vetra.

Sometime after Pathfinder Ryder has visited Kadara Port and returns to the Tempest, you will receive an email, which begins this loyalty mission.

Vetra has received an encrypted message from Sid saying she wants to talk with Vetra and Ryder. It sounds urgent.

Acknowledge the e-mail to receive the next objective.

Go to Vetra on the Tempest Edit

Vetra connects to Sid over the comm. Sid has been listening to outpost updates and caught a message about settlers going missing - probably kidnapped. She sends the navpoint to the location she believes is where the settlers have been taken. Vetra isn't happy about her sister getting involved in something potentially dangerous.

Find the abandoned mine Edit

is far to the southwest in Crater: Idriya.

Note: During loyalty missions, manual saving is disabled for the duration of the mission. Save before entering the building.

Before entering the building, circle around to the back. Jump up to a second-floor ledge and there is an Adapted Initiative Core Tech that can be scanned for +100

and large orange lootable container (this container tends to yield armor pieces or weapons at random, including and up to ultra-rare ones).

When entering the building, Ryder can change Loadout. A short way into the building, the pathfinder team falls through a trap door. A woman named Meriweather tells the team that the missing people were bait to lure Nyx into the trap. Nyx has interfered in Meriweather's affairs.

There are other prisoners located in the trap area as well.

Find a way out of Meriweather's prison Edit

Speaking with Galloway, Ryder learns that the other prisoners were part of Meriweather's smuggling ring, and Vetra helped them out from the smuggling ring. Vetra has no idea what this is all about.

Galloway says that the colonists never meet Vetra in person - only talked over the comm. The colonists wanted to leave the gang because Meriweather started doing bad things they didn't agree with.

A datapad reveals that the colonists were living in Prodromos after leaving the gang.

Vetra wants some answers but first the team has to get out of there.

Go downstairs and scan the locked door. The door can't be opened from this side. Over the comm a Mysterious Ally says she can open the door from the other side when it has power. Powering the door has to be done from Ryder's side.

Use the scanner to find the generator. The generator is working but has to be connected to the door.

Search upstairs using the scanner. Some cables on the floor will do the job. Bring the cables down to the generator and connect the cables. The Mysterious Ally then unlocks the door and Ryder can exit the room.

However, the Mysterious Ally says that opening door has triggered a silent alarm, and the colonists have to hide in a nearby storage room.

A timer countdown starts for incoming hostiles. Stay inside the storage room until the countdown is complete.

When the timer runs out, the Mysterious Ally says Ryder can use the security screen to see the guards and allow the guards pass by so the guards can be surprised.

Take out the guards.

Note: In some instances, the guards will line up in a row making an upgraded Shockwave an excellent choice to take the guards down.

Head to the mess hall Edit

There are a datapad and a lootable container along the way, and health and ammo caches nearby.

Use the security cam to find an advantage Edit

Ryder will see a locked workshop door, a generator, and some guards when using the security camera scanner.

Note: The security camera scanner functions the same as Ryder's scanner and will award RD for scanning enemies for Aid APEX (if they haven't already been scanned).

Choose between unlocking the workshop or blowing up the generator.

Note: If Ryder doesn't choose to open the workshop door now, the ability to open the room for the loot is lost.

The generator can discharge electricity and take out some guards.

In the locked room, there are three containers with the usual loot.

Deal with the Outlaws in the mess hall Edit

Get to the menagerie Edit

Meriweather is upset because she has discovered that someone is messing with the gang's security but she doesn't seem to know that her prisoners are escaping.

There is a datapad located here.

Use the menagerie's security cam Edit

In the room, there are cages with various wildlife (that will probably attack the guards as well as Ryder's team), turrets, and a cage with a Fiend.

Ryder can choose to turn off the turrets, make the turrets attack the guards, or free the beasts. Note: The Fiend will not be released as its cage has a manual release.

Clear out the menagerie Edit

In their desperation, the guards released the Fiend from the cage. Kill the Fiend.

There are three datapads and at least three containers in this location.

Get to the workshop Edit

Meriweather says there is a rat in the system and promises double rations to the one who finds it.

There is a datapad in this location.

Use the workshop's security cam Edit

In the room are a Hydra Mech, a Crane Rig, four Compressed gas tanks, and some guards.

Ryder can choose to blow the crane rig's engine (its core will explode), gas the guards (but this might affect Ryder's team as well), or disable the Hydra Mech.

Note: On the harder difficulties, the Hydra Mech will be more difficult to defeat.

Deal with the workshop guards Edit

Take out the workshop guards.

Move forward through the rest of the facility Edit

Over the comm the team hears that Sid has been discovered.

Deal with security and guards Edit

In the next room are guards, turrets, and some adhi beasts. Eliminate all of the threats.

Ryder can choose to destroy the turrets but this is not required. On the left side of the platform where the turrets are located above is a panel to disable the turrets.

Get to Sid Edit

Meriweather has captured Sid, and tells Vetra to come to her. In the shuttle area, Meriweather holding Sid in front of her with a primed grenade in her hand. Meriweather orders Ryder's team to put down their weapons.

Ryder has the option for a few seconds to shoot at Meriweather. (Ryder shoots the grenade out of Meriwether's hand and Vetra picks up the grenade and throws the grenade at the guards).

Even if Ryder doesn't shoot at Meriweather, the situation will be resolved without getting Sid killed.

Kill Meriweather and her guards Edit

Ryder now needs to kill Meriweather. During the fight, a group of reinforcements will come in from the right.

Sid says that she is sorry. She was just trying to help the colonists who wanted to get away from Kadara. Vetra is afraid Sid eventually will get hurt if Sid keeps getting involved with dangerous people. Sid then returns to the Nexus. Vetra is grateful for Ryder's help and Ryder now has her loyalty.

Speak with Vetra on the Tempest. Vetra is annoyed that Sid has been using her name to call in favors. Sid has acquired the genome for something called "cat", and Vetra has no idea what that is. Vetra is worried about Sid.

During the conversation there is an option to flirt with her.

Ryder will also receive an email from Sid.

Retrieved from "https://masseffect.fandom.com/wiki/Vetra_Nyx:_Means_and_Ends?oldid=515357"
Community content is available under CC-BY-SA unless otherwise noted.