Vetra Nyx serves as the Pathfinder team's jack-of-all-trades, emphasis on the latter. In addition to her duties she brokers deals between the lawful and lawless elements of the Heleus Cluster.

Surviving the rough world of smugglers and mercenaries requires street-smarts, adaptability and cunning, qualities that serve Vetra well in Andromeda. Her experiences have taught her the importance of having someone to watch your back, and she’ll do anything for the people she considers friends and family.[3]

Vetra is a potential romantic interest for a Pathfinder Ryder of either gender.

Vetra was born on Palaven, but has also disclosed that she is not recognized as a formal citizen of turian society, never having entered boot camp. Vetra left Palaven at an early age, and spent most of her life in the outer reaches of Council space, never settling down in one place.

Having been orphaned at a young age, it fell on her to raise her younger sister. She's been known to have worked numerous odd jobs, some of them unsavory. Vetra has been linked to smuggling and mercenary work, and allegedly may have been part of an unnamed mercenary band that was hired to steal sensitive military secrets from a base on Menae.

Eventually she ended up working as a provisioner for Nakmor Kesh during the initial stages of the Andromeda Initiative project. In time, Vetra and her younger sister were officially enlisted into the Andromeda Initiative after a referral from Kesh, who has Vetra listed as "a business associate". She arrived in Andromeda via the Nexus alongside her younger sister Sidera (Sid). She is of the opinion that family ties are more important than venturing deeper into the galaxy.

Vetra is acquainted with Kesh's grandfather Nakmor Drack. During the Nexus' construction, Vetra stole supplies from Drack, and waited until they were all in Kesh's office to tell the old krogan she was working for his granddaughter all along. Vetra and Kesh both think of this as a funny memory. 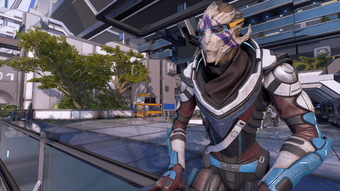 When Pathfinder Ryder inspects the Tempest, they meet Vetra who is coordinating the Tempest's supply corps in stocking the ship. Vetra introduces herself as the "Initiative wrangler, provisioner, gunner, and everything in between." Vetra is eager to depart for their adventure, but a dock hand named Ben attempts to delay their departure by attempting to inventory the outpost development equipment for Foster Addison. Vetra is able to get him to look the other way in exchange for using her connections to get his son out of cryo.

Afterwards, she gives the Pathfinder a tour of the ship, as well as introducing Ryder to Gil Brodie and Dr. Suvi Anwar. After the introductions are over, Vetra convinces Ryder that her ability to find supplies and her positive rapport with the Tempest's crew would make her a valuable asset to Ryder's team.

Vetra brings Sid's concerns about kidnapped settlers to Ryder's attention. Sid provides their location on H-047c and wants to help, but Vetra ordered her to remain on the Nexus where she is safe.

Upon entering an outlaw base, the squad falls into a trap. To Vetra's confusion, their captor, Meriweather, and her other captives, all claim that Vetra helped the captives escape their outlaw pasts by helping them leave Meriweather's smuggling ring and create new lives for themselves in the Andromeda outposts. After escaping the prison, Vetra learns that Sid was the outlaws' true benefactor, having used her older sister's name and voice to help Meriweather's indentured servants escape. When the squad confronts Meriweather, they find Meriweather holding Sid hostage but they managed to kill her and rescue Sid. Afterwards, Vetra scolds her sister for recklessly putting her life in danger.

Note: †Rank 6 of each Skill is unavailable to Vetra until her loyalty mission Vetra Nyx: Means and Ends is completed.

Vetra is armed with a modified Cyclone assault rifle.

After encountering Vetra on the Nexus she will join Ryder's crew as a squad mate. Conversing with her between missions gives the player the option to flirt with her. After unlocking the Remav system, Ryder will be asked to speak with Vetra's sister Sid on the Nexus, prompting Vetra's loyalty mission, Vetra Nyx: Means and Ends. After completion of her loyalty mission Vetra will invite Ryder to the Sulfur Springs on Kadara via email. At the Sulfur Springs, the two are racing to climb to the top of the ridge. There is an interrupt for Ryder to cheat and use their jump jet to reach the top. At the top of the ridge, the two lay down and stare at the sky. If the player has previously flirted with Vetra and is not currently locked into a full romance with another character, Vetra will ask for confirmation of Ryder's interest. At this point the player can choose to lock in a full relationship with Vetra or to decline.

The next interaction with Vetra will reveal she planned a surprise dinner for Ryder. Unfortunately, Vetra is a terrible cook and ruined the steak. Realizing that she ruined the dinner, she confides that she wanted to do something special for Ryder and says that she loves Ryder. Ryder can then reassure her and tell her they love her too. Afterwards, they kiss and fool around.

She will end up snuggled on Ryder's shoulder during the Tempest's Movie Night.

When Ryder returns to the ship during Meridian: The Way Home, she will request they meet her on the bridge for a brief talk before continuing with the mission. She has romance-specific dialogue during the game's epilogue, where Vetra expresses a desire to build a home together with Ryder.

Retrieved from "https://masseffect.fandom.com/wiki/Vetra_Nyx?oldid=519626"
Community content is available under CC-BY-SA unless otherwise noted.