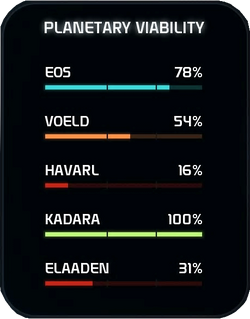 Viability in Andromeda is the measure of a planet's suitability for habitation as calculated by Andromeda Initiative.

The ultimate goal of the Initiative is to make a new self-sustaining home on potential colony planets in the Heleus Cluster. Before departing for the Andromeda Galaxy, the Initiative chose seven Golden Worlds for colonization efforts.

Initially, however, the planets encountered are less than ideal. Each potential colony planet has a viability rating starting at 0% and can be raised to 100%. Raising the viability of each planet is one of Pathfinder Ryder's main goals.

Note: Once Ryder reaches 100% viability for a given planet, viability will no longer be earned for that planet and only AVP

Ryder is required to reach 40% viability on each planet (where an outpost is possible) before an outpost can be constructed. In addition to viability, there are usually other requirements for constructing an outpost on specific planets. Those additional requirements will be listed in the Journal under the Heleus Assignments section for the planet in question.

If planetary viability is raised to 100% for all five planets and the mission Epilogue: Home and Away has been completed, a special Priority Ops mission The World is Waiting will be unlocked.

and increases planetary viability by +2%.

Retrieved from "https://masseffect.fandom.com/wiki/Viability?oldid=515516"
Community content is available under CC-BY-SA unless otherwise noted.