Vigil is a Prothean Virtual Intelligence found on Ilos; an advanced non-organic analysis system with personality imprints of Ksad Ishan, the Prothean Chief Overseer of the Ilos facility. It helps Commander Shepard understand the fate of the Prothean civilization and the truth behind the Conduit.

Using force fields to stop the Mako in its tracks, Vigil guides Shepard's team into the Watcher's Chamber in the archives. Upon meeting them, Vigil's hologram interface has badly degraded, but its memory core is still intact. After monitoring their communications during the operation on the surface, it has translated its output so they can all understand it. It is relieved to see the squad because none of them are artificial intelligences or indoctrinated, proving the Protheans' contingency plan worked. Vigil is desperate to help Shepard and prevent the Commander from making the same mistakes that the Protheans did.

Vigil explains that, following a cycle that has continued for millions of years, the Reapers returned and began destroying all organic civilizations in the galaxy fifty thousand years ago. Prothean scientists on Ilos, however, were saved because the records about Ilos were destroyed in the initial wave. The staff on the planet were preserved in an underground facility that the Reapers failed to find and destroy, put into cryogenic suspension with Vigil to watch over them, so they could be released when the Reapers were gone.

However, because of the centuries it took for the Reapers to destroy the Protheans, Vigil was forced to save power by deactivating the cryogenic pods one by one, killing the individuals inside. Most of the Protheans died, except for the twelve top scientists who were brought out of the pods after the Reapers finally left. There were not enough of the scientists to reproduce and save their species from extinction, so they instead tried to save future species. The remaining Protheans used the Conduit to reach the Citadel, and interfered with the signal to the keepers that allows the Citadel to become a mass relay. However, it is uncertain as to what happened to them, as the Conduit is a one-way passage from Ilos to the Citadel. 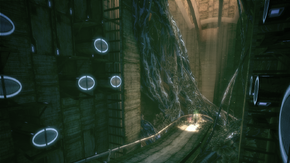 Although the members of Shepard's squad are horrified that Vigil killed the people it was supposed to protect, Vigil says that this eventuality was not entirely unforeseen by the Protheans, and that it was following contingency planning. The squad is sure the non-essential staff at Ilos didn't know about this "contingency plan", though.

Vigil gives Shepard a data file that will grant temporary direct control of the Citadel's functions, saying that Shepard must break the cycle of genocide that the Reapers cause. Despite its knowledge about the Reapers, Vigil can't answer Shepard's questions about why the Reapers keep fostering and then destroying organic life; the motivations of synthetic life were beyond the Protheans' comprehension.

If Liara T'Soni is in the squad, she wants to spend more time talking to Vigil to learn more about the Protheans from it, saying this might be their only chance. Shepard can tell her off for wasting their time, but even if Shepard agrees, Vigil explains its programming has been limited, and it is able to provide only information directly related to stopping the Reapers. Nonetheless, if Ilos is explored further, Vigil could provide a treasure trove of knowledge.

According to the Council (or Anderson if the Council was killed in 2183), groups that ventured to Ilos following Shepard's visit found that Vigil had shut down (possibly due to full power loss). This allowed the Council to continue to believe that Sovereign was a geth ship, due partially to the lack of evidence that the Reapers existed.

Retrieved from "https://masseffect.fandom.com/wiki/Vigil?oldid=513583"
Community content is available under CC-BY-SA unless otherwise noted.