Virmire: Wrex and the Genophage 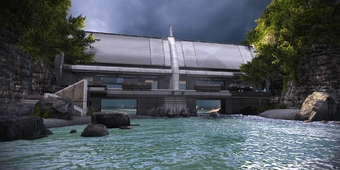 Saren appears to have discovered a cure for the genophage and is breeding an army of krogan. Wrex is furious that Captain Kirrahe wants to destroy the cure. The Captain is worried about Wrex's state of mind and doesn't want to continue if Wrex is going to be a problem.

This assignment is automatically gained after reaching the salarian camp only if Wrex is available as a squadmate. 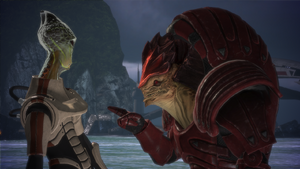 As stated by Kirrahe, you must deal with Wrex first to advance the story. He can be found intermittently blasting his shotgun at the beach, by the tent nearest to the base wall. Approaching him automatically triggers the confrontation, so if you want to do other things first give him a wide berth.

Most possible decisions here result in a big infusion of morality points in either direction. The choice is yours as to whether Wrex makes it out of the conversation alive!

If you keep Wrex alive, you will be rewarded with the Charismatic achievement. Contrary to this achievement's description, you don't actually have to use Charm or Intimidate - having Wrex alive does the trick, too.

If Wrex dies, you automatically get his equipment back.