Voeld is a world going through an ice age. Once packed with dozens of urban centers, most of Voeld's angaran population now lives in scattered settlements. The remains of vast ancient cities are still entombed in ice.

ALERT: Voeld is a stronghold of the kett. Caution advised. 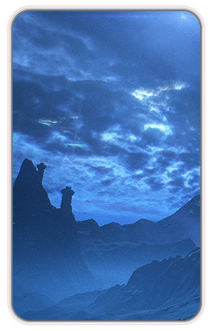 From the Milky Way, the Initiative identified Voeld as Habitat 6, a "golden world" projected to be a life-sustaining and temperate garden world. This is confirmed by angaran historians: Voeld was once a heavily populated and thriving angaran colony.

During the Scourge event, gravitational distortions affected Voeld's orbit. Models from the Nexus tech labs show how this triggered a minor ice age. The angara were forced to withdraw to a few urban centers, with the rest of Voeld's population scattered in smaller settlements.

Voeld is therefore both culturally and strategically important to the angara, and has drawn the attention of the kett. Reports suggest a significant military presence on both sides, as the Angaran Resistance fight to defend Voeld's population and protect the ice-encased remains of their world.

The Initiative's new outpost, Taerve Uni, has been safely established. Led by new mayor Priya Blake, Taerve Uni is committed to open borders with the angara as Voeld becomes more habitable. The outpost is now a major supplier of water ice to other colonies and the Nexus.

Analyzing Suvi's orbital readings, it appears that the Voeld vault, unable to gravitationally compensate for Voeld's change in orbit, has triggered a controlled melt of frozen carbon dioxide in the permafrost. Projections show this will thicken the atmosphere, gradually raising Voeld's temperature to ease the ice age. This reveals that Remnant vaults are capable of sophisticated analysis and response to planetary conditions.

The following Priority Ops missions take place or are acquired on Voeld:

The following Allies and Relationships missions take place or are acquired on Voeld:

The following Heleus Assignments missions take place or are acquired on Voeld:

The following Additional Tasks take place or are acquired on Voeld:


ANALYSIS:
This Remnant Architect's programming directives have been interrupted. It is in an orbital standby mode and remains tethered to its home planet Voeld. From this clearer vantage point, obvious, subtle damage from repeated freeze-thaw cycles in a saturated environment. Many systems seem to be pinging for maintenance.

Voeld is an ice world with freezing levels of cold prior to activation of the planet's vault. All areas not heated or indoors pose an environmental hazard to personnel and vehicles.

Retrieved from "https://masseffect.fandom.com/wiki/Voeld?oldid=521662"
Community content is available under CC-BY-SA unless otherwise noted.