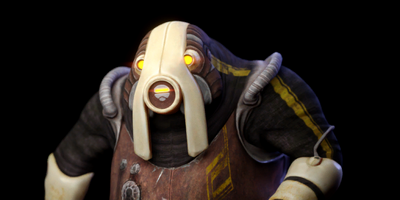 The volus are an associate race on the Citadel with their own embassy, but are also a client race of the turians. They hail from Irune, which possesses a high-pressure greenhouse atmosphere able to support an ammonia-based biochemistry. As a result, the volus must wear pressure suits and breathers when dealing with other species.

Because they are not physically adept compared to most species, volus mostly make their influence felt through trade and commerce, and they have a long history on the Citadel. However, they have never been invited to join the Council, which is a sore point for many volus individuals. 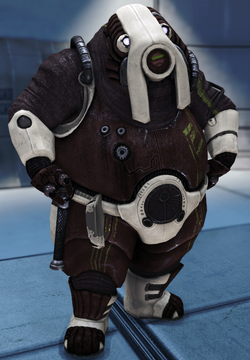 The volus homeworld Irune features an ammonia-based ecology and a gravitational field 1.5 times that of Earth, as well as a high-pressure atmosphere. This is reflected in the physiology of the volus themselves. The volus are unable to survive unprotected in an atmosphere more suitable to humans and other carbon-based lifeforms, and as such require protective suits capable of providing the proper atmosphere, as well as being pressurized to support the volus. Traditional nitrogen/oxygen air mixtures are poisonous to them, and in the low pressure atmospheres tolerable to most species, their flesh will actually split open.

As the volus are never seen outside of their protective suits, little else is known about their appearance and physiology. It has been noted, however, that volus have cloacae, a trait they share with the salarians. Their saliva looks coppery-blue under standard environments, and they're capable of spitting said fluid. Some volus individuals have also shown themselves capable of using biotics.

Despite individuals distinctly sounding like males or females to human listeners, volus genders are apparently a mystery as well. The volus themselves consider the question both intrusive and hilariously irrelevant, to the point that supposedly the STG has a running tally of all the blatant misinformation the volus have said on the subject. With little else to go on, people simply assign an arbitrary gender value on a volus based on what they sound like.

All volus contract the disease Yoqtan during childhood. Considered a rite of passage, its symptoms are easy to alleviate and it only kills the weakest children.

The volus were the third race to post an embassy to the Citadel after the asari and salarians, roughly 2,384 galactic standard years ago (according to Citadel records accessed through Avina, outside the Embassies). The volus' mercantile prowess made them instrumental in developing a stable galactic economy. They authored the Unified Banking Act, which established the credit as the standard currency of interstellar trade, and the volus continue to monitor and balance the galactic economy even today. After first contact with the turians during the Krogan Rebellions in the first millennium CE, the volus petitioned for client status within the Turian Hierarchy.

Despite their important contributions to the Citadel and galactic society, they have never been offered a seat on the Council. This is a source of anger for some volus, particularly the volus ambassador Din Korlack. Council races need to have provided some extraordinary service to the Citadel, such as the turians' military support during the Krogan Rebellions. Council races also need to provide fleets, resources, and economic aid in case of disaster, none of which the volus can currently supply.

Recently, the volus have been negotiating with the Systems Alliance through the Turian Hierarchy over colonisation rights to Patavig. These negotiations have been running smoothly thus far.

Because of the volus' outlier biology in relation to most other Citadel races, setting up compatible and appropriately sealed environments in other races' residential areas is illegal on most planets and prohibitively expensive where permitted. The chances of explosive blowout, environmental contamination, and other related problems have deemed the notion too risky.

During the Reaper invasion in 2186, the volus quickly came under attack as the Reapers overwhelmed the turian defense fleets. Reaper husks were deployed on Irune, endangering many volus cities which had been built on opportune trade routes rather than militarily defensible positions. Volus refugees fled Irune for the relative safety of turian colonies. After the Miracle at Palaven, a joint turian and krogan force landed on Irune to attempt to liberate the planet.

Depending on Commander Shepard's actions, the volus can contribute the following assets to the allied war effort: a bombing fleet, the dreadnought Kwunu, fabrication units, and an engineering team.

Starting Over in Andromeda

Around 3,000 volus signed up with the Andromeda Initiative to colonize the distant Andromeda galaxy. However, 30 years before projected arrival their starship Keelah Si'yah was hit with an epidemic that can cross species barriers as well as system failures that forced premature revival of some colonists from cryostasis.

Even while the volus never took off their suits in cryosleep, the Fortinbras Plague managed to infect some of them since the suits were designed to keep volus in, not keep pathogens out. The results on the species were particularly gruesome as they tended to explode within their suits in their final agonizing moments. The disease used Yoqtan as the base infection vector, but childhood immunity has no effect on the species.

A cure was eventually discovered and delivered to all passengers of the ark, who promptly went back to hibernation after airlocking the dead.

Volus culture is dominated by trade, whether it be of land, resources, or even other tribe members. The volus have a reputation as traders and merchants, and many, such as Barla Von, work as some of the best financial advisers in Citadel space. Due to the volus not being physically adept, they tend not to be violent, and can even seem overly-pacifistic and cowardly to other, more militant species. The volus homeworld Irune is remarkable for having done away with warfare as an institution of the state, as the volus lack the romantic view of war found in the galaxy's more aggressive species. Physical skirmishes between groups rarely last long, and are almost always ended by social castigation, bargaining agreements, or harsh economic sanctions.

The volus hold in high regard an artifact called the Book of Plenix, which calls for charity and forgiveness of debts in case the volus do become involved in war. The artifact's last known location is on their homeworld Irune during the onset of the Reaper War in 2186.

Volus have two names but no family names. According to volus sensibilities one cannot own a person, so using a family name would essentially be laying claim to their offspring. Possibly because of their tribal origins, volus tend to refer to members of other races by their source world rather than species name (i.e. "Earth-clan" instead of "human"). A notable exception to this is that they refer to quarians as "Migrant-clan", or "clanless", due to their lack of a homeworld. They also tend to refer to themselves as "Vol-clan".

The volus economy is out of proportion to their modest resource base. They are aggressive traders and industrialists with a keen grasp of exchange and finance. Many of the galaxy's largest banks, holding corporations, and manufacturing cartels, such as the Elkoss Combine, are owned or managed by volus. They also regulate the Citadel's complex galactic economy.

The volus appear to have a polytheistic religion. Some of their gods have planets named after them: Cherk Sab, a deity of luck, and Zada Ban, a god of punishment.

Their ancient mythology and folklore heavily features the planet Jak Ser since it is bright enough to be seen from Irune's night side without a telescope.

The volus have at least one dialect of their language called Iperian Volus. The following words or phrases are usually taken from volus-named planets.

The volus government is known as the Vol Protectorate. Rather than being a fully sovereign government in its own right, the Protectorate is a client state of the Turian Hierarchy. In return for falling under the protective umbrella of the turian military, the volus pay a tax to the Hierarchy, as well as deferring to the turians in all foreign policy matters and providing auxiliary troops to the turian armed forces. They still maintain an embassy on the Citadel, making them an associate species of the Council, though they currently share their embassy with the elcor.

In the entire history of volus civilization, the Vol Protectorate has only issued three writs of exile against its citizens. Two of those are for the political agitator Gaffno Yap.

The volus are not physically cut out for combat, be it a full-scale war or even a bar room scuffle. As such, they are highly dependent on the turians for defense, although the volus themselves do provide some auxiliary troops to the Hierarchy. These forces rely on specially sealed armor in combat, and mitigate their disadvantages through the use of technologically advanced power armor as well as avant-garde equipment. The volus will support the turians in any war they might pursue, and the turians will do the same for the volus.

Possibly for this reason, volus weaponry tends to be utilitarian rather than high-grade. Some volus manufacturers specialise in cheaper, lower-grade copies of expensive turian equipment.

Volus do employ some biotics in combat; these individuals have been known to show impressive biotic powers despite the volus' diminutive size.

Volus prefer airpower in conflicts, counting on turians for ground support. They maintain several flotillas of heavy-bomber frigates capable of warfare in any atmosphere.

The volus have only produced one dreadnought, the Kwunu, named after the diplomat who negotiated their client-race status with the turians. The Kwunu is the only volus ship of its class, but it is remarkably well-armed. Its broadside cannons and main gun are all Thanix Magnetic-Hydrodynamic Weapons. A turian general touring the Kwunu after its maiden system-voyage enthusiastically declared that the ship could "char a planet three times over". While its construction was funded entirely by the Elkoss Combine corporation, the dreadnought was jointly gifted to the Vol Protectorate and Turian Hierarchy upon completion.