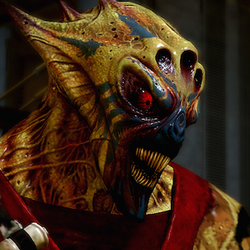 Known for their unique biology and aggressive behavior, the vorcha of Heshtok are a primitive race that live among the galaxy's darker and more dangerous locations, such as Omega. Many vorcha are trained by the krogan Blood Pack as mercenaries due to their savage nature and adaptability to different environments. The rest of galactic civilization regards them as pests and scavengers, and their presence is generally seen as a blight.

The vorcha are the shortest-lived sapient species currently known, with an average lifespan of only 20 years. 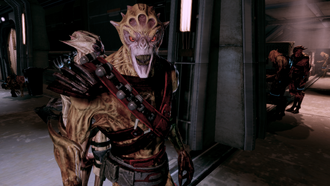 The vorcha are known for a rather unique biology that differentiates them from other known species and which carries with it a striking set of advantages and disadvantages. They have clusters of non-differentiated cells, similar to those found on the planarian worm of Earth. These cells allow the vorcha limited regenerative abilities, as well as the ability to adapt quickly to its environment, such as developing thicker skin after being burned or increased musculature to survive in high gravity. When a vorcha is injured or in distress, these cells move to the affected area and rapidly (~1 week) mature to specialized forms that will alleviate the issue. This also makes the Vorcha immune to almost all disease.[1]

A vorcha that is cut or burned will adapt to have thicker skin. The lungs of a vorcha placed in a barely-breathable atmosphere will adapt to better use the gases there. A vorcha subjected to high gravity will quickly develop stronger heart and leg muscles. Non-differentiated vorcha cell clusters do replenish themselves, but the process is slow. Generally, vorcha can only adapt to a single environment within their brief lives. However, what cells are replaced allow them to heal rapidly, and even to regrow lost limbs over a period of months.

As a consequence of this, the vorcha as a species no longer evolve as other races do. The vorcha equivalent of DNA has remained unchanged for millions of years. There is no need for them to evolve as a species when they can adapt as individuals.

The vorcha originate from Heshtok, a small, hostile, overcrowded planet which has been largely stripped of natural resources by successive generations of this fast-breeding, savage species. The lack of resources has resulted in a tight-knit, clan-based society in which rival clans wage constant war against one another for control of scarce resources. Even as their population grows, the vorcha constantly fight each other in fierce competition over basic necessities. This incessant warfare has made each generation of vorcha stronger and more aggressive than that which preceded it, but their continual lack of resources has kept vorcha society extremely primitive.

In 2185, some vorcha on Omega allied themselves with the Collectors in an attempt to raise their quality of life. They hoped to become the rulers of Omega and deactivated the station's life support systems, intending to kill all of its inhabitants except for themselves.

During the Reaper invasion in 2186, the Reapers encountered difficulties in harvesting the vorcha homeworld. Because the vorcha were not cowed by the Reapers' impersonal intimidation tactics and the effects of the destruction of resources like water were negligible given the vorcha could adapt themselves to survive, the Reapers devoted their efforts to immobilizing Heshtok's population and preventing the vorcha from contributing in the galactic war.

Vorcha society is built around combat. In fact, the vorcha use combat, both individually and in groups, as their default form of communication resulting in their communications being primarily non-verbal. The vorcha are a clan based people who prefer living in communal environments with others of their species to living alone or in the company of alien races. When a clan population grows too large, younger members will depart to start a new clan elsewhere. The vorcha are extremely aggressive, both against rivals of their own species and against any alien who stands in their way. Vorcha who have managed to escape their homeworld have a tendency to occupy uninhabited areas of space stations or larger spaceships. 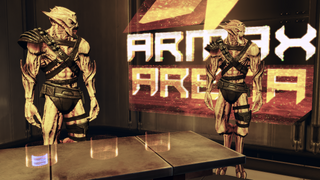 The vorcha are not themselves a space-faring race, although many have found their way off-world as stowaways on ships visiting their homeworld. The vorcha who escaped their hostile homeworld did so by hiding on the ships of space-faring races that had the misfortune of visiting their planet. Their adaptability and resilience allows them to flourish in the dark and dirty corners of the places they end up.

Seeing the potential of the vorcha's individual adaptability, krogan Blood Pack mercenaries often sweep pockets of vorcha, gathering them up and literally beating them into soldiers. Vorcha "trained" by this ordeal are stronger, faster, smarter, and more resilient than other members of the race. Gaining even a few vorcha gives a mercenary band a formidable advantage; each additional vorcha magnifies the gang's combat ferocity exponentially.

Shortly after the vorcha's discovery, several asari mining corporations adopted vorcha orphans from Heshtok, raising them to live nonviolent lives and employed them in the mining industry on Parasc. While these efforts were at first labeled colonialist, the orphans became minor celebrities when it was discovered that the vorcha habit of using violence to communicate was not completely innate. Several spoke throughout Citadel space on behalf of their species, but their short life spans kept their careers very brief. Even today, companies that want vorcha labor have the poor choice between adopting and educating them as youngsters just to watch them age and die or dealing with autonomous but violent adults.

The vorcha do not have a recognized single government that would allow them membership in any galactic league. Alliances between bloodlines are tenuous at best, and the vorcha's short, violent lives ensure there are few lasting institutions.

The vorcha have no formal military force to speak of. Although recognized as vicious warriors in their own right, their lack of any government has precluded the formation of armies and fleets, and it has never been in the best interest of other races to allow the vorcha to construct their own dreadnoughts. 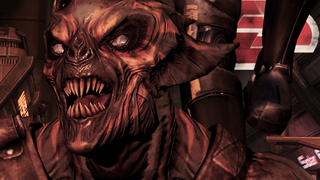 Many vorcha are employed as cannon-fodder troops in gangs such as the Blood Pack, where their inexperience further shortens their brief lifespans. During the Reaper invasion, other races attempted to counter this and aid the vorcha by supplying their own ships and soldiers to lead vorcha forces in battle, but this strategy met with mixed success. The Void Devils, a fighter group with vorcha pilots trained by humans and turians, fought hard during the battle for Heshtok and maintained the discipline to retreat, a notable accomplishment. The battle for Lihrat, however, was a disaster, with an alien-led vorcha fleet being completely wiped out because of its insufficient firepower and with the Reapers rumored to not have lost a single ship.