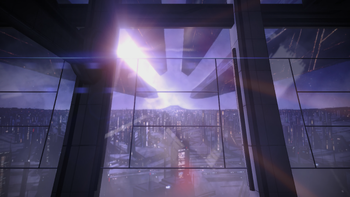 The five "arms" of the Citadel are known as the Wards. They are the residential centres of the Citadel, each essentially a self-contained city home to millions, with a population density equal to the Earth cities of Singapore or Hong Kong.

The skyscrapers of the Wards are sealed against vacuum as the atmosphere is only maintained to a certain height. Though the inhabitants of the Wards usually rebuild and arrange buildings to their liking, the keepers have been known to descend on areas of the Wards and rearrange them. In times of need the Wards can be closed, turning the Citadel into an impenetrable cylinder, protecting the people inside.

Zakera Ward is the only part of the Wards that Commander Shepard can visit in 2185.

Emily Wong, a reporter for the Citadel NewsNet, reports that Danaria Kleris, a sanitation worker working in the ward, had failed to report when her shift ended. Her assignment was near the keepers area of the Ward, and the authorities fear she may have been transported to the protein vats for recycling. Later, Wong announces her body was found, and C-Sec suspects foul play.

There is a Sensory Gallery at the ward where people can experience sensations like how other races do: smell like an elcor, hear like a drell, experience rain as a turian would, etc. It doesn't have a booth for thinking like an artificial intelligence, however.

Tayseri Ward is home to the Dilinaga Concert Hall. During the Battle of the Citadel, the destruction of Sovereign caused massive damage to the Ward. Even two years after the event, some areas of the ward remain without power and repairs are estimated to continue for years to come.

According to the Shadow Broker's dossier, Jacob Taylor resided on Bachjret Ward while living on the Citadel.

Two conflicting names are given for the Citadel's fifth Ward in 2186.

When Commander Shepard initially visits Huerta Memorial Hospital and speaks with Dr. Karin Chakwas, she mentions that she worked in Shalta Ward as a medical researcher during Shepard's detainment by the Alliance following the events of Arrival.

During the Cerberus attack on the Citadel, a C-Sec VI can be heard announcing that Aroch Ward, along with Zakera, Tayseri, Bachjret, and Kithoi Wards, is experiencing civil unrest.

On foot, this area can be accessed via the Wards Access corridor (by the Alleyway) on the north side, or up the stairs from the C-Sec Academy elevator, past Officer Eddie Lang. The Wards Access corridor connects to the Presidium and is usually full of C-Sec officers, including a new asari recruit talking to her turian supervisor. The Upper Wards are home to Dr. Michel's Med Clinic, the stairs up to Flux - with Emily Wong waiting nearby early on - and the door to the Markets. The windows on the Upper Wards offer a spectacular view - Shepard, Ashley and Kaidan can take a look outside soon after arriving and marvel at the station.

The Upper Wards also allow a view of the Serpent Nebula and the passing Destiny Ascension, which gets everyone crowding around to look, including a volus talking to a friend about the tour he recently took aboard the asari dreadnought. Later, the human Terra Firma party holds a protest on the Upper Wards to mark Armistice Day.

There are two levels to the Markets. The Upper Markets are reached by a door from the Upper Wards, home to several stalls including a volus merchant, Expat, who can sell items, and tell Shepard a little about Feros and Noveria.

Shepard can overhear an ongoing argument between a human who is trying to return an item to a turian merchant in the Upper Markets. This man goes on to insist on the same refund for three more years in other locations: at a Shipping Warehouse in the Zakera Ward in 2185, and at the Meridian market place in the Presidium Commons in 2186.

Down the stairs past Conrad Verner are the Lower Markets which have a less savoury reputation. Shepard can buy non-human armour, upgrades and general supplies from a salarian merchant called Morlan. 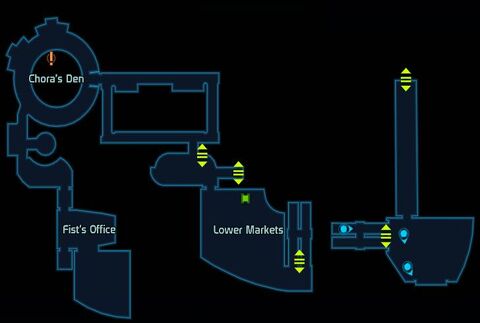 The Lower Wards are accessible through a door in the Lower Markets, or through the alleyway that links them to the elevator from the Wards Access corridor, where Tali was told to meet the Shadow Broker. The most notorious location in the Lower Wards is Chora's Den, a club featuring asari dancers which is run by a crime boss called Fist.

The C-Sec Academy is technically on the Lower Wards, possibly because most of C-Sec's force is assigned to the Wards. The Academy houses a traffic control station, the C-Sec Requisitions Officer who can sell Shepard specialist gear, and the elevator to the private docking bay for the SSV Normandy.

The Silversun Strip is a bustling commercial and recreation district located in the lower Wards. Attractions include the Armax Arsenal Arena, a popular holographic combat simulator that broadcasts matches across the galaxy; Tiberius Towers, a luxury apartment complex; Castle Arcade, a hub for gamers of all kinds; and the Silver Coast Casino, a place where the wealthy can gamble on Quasar, roulette, and varren racing. 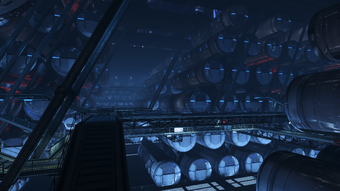 The Wards also feature the Citadel Archives, a vast complex restricted to anyone but staff, Council officials, and Spectres. Located below the Wards, the Archives house an enormous collection of various physical artifacts and recordings from throughout the galaxy that are of historical or cultural importance, as well as official identification records and other data utilized by the Council bureaucracy.

Physical items are stored within a system of large, mass effect field-sealed iridium vaults that can be moved throughout the entire complex for easy access and organization. Large portions of the Archives are just mountains of the vaults. Visual and audio recordings can be viewed in specific holographic chambers located within the Archives' central offices, filterable depending on the viewer's security clearance. Highly confidential records such as Spectre biometrics can also be updated there.

In event of emergency, the Archives can go into lockdown mode.