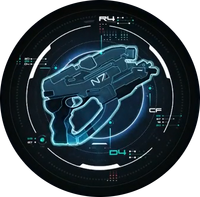 In Mass Effect: Andromeda, there are five types of weapons that can be used by any character. Assault Rifles, Pistols, Sniper Rifles, Shotguns, and Melee Weapons.

Weapons can be found dropped from enemies, looted from containers, purchased from merchants, or by Development (crafting) at a Research Center.

Each weapon counts as one item towards the Inventory item limit.

In addition to weapons, combat also allows use of Flak Cannons, Grenades, Trip Mines, etc. Adding points to Tech skills, allows focusing more on experimental weapons, such as the Flamethrower and the Cryo Beam. Enemies are not generally classified as 'weapons' so are not listed here, but by using Biotic skills can, in fact, temporarily turn an enemy into a weapon, either as a shield or to do damage to another enemy.

Weapons can only be added/changed/removed at a Loadout terminal.

The number of weapons Ryder can carry will depend on the skill points placed into the Combat Fitness skill.

Total weapon weight is affected by the number and type of weapons chosen at the Loadout terminal.

Weapons can be customized by two different methods in Mass Effect: Andromeda.

Augmentations are semi-permanent customizations to crafted weapons or armor in Mass Effect: Andromeda. When a weapon is created during Development (crafting), hexagonal-shaped sockets are available to add Augmentations to the weapon. These augmentations cannot be changed like weapon Mods and stay part of that weapon until it is deconstructed.

The customization of a weapon in Mass Effect: Andromeda can change stats of Pathfinder Ryder's other weapons. This is known as a buff. There are active and passive buffs based upon the weapon type.

Active buffs are a moot point for other weapons. Unequipped weapon stats will be changed by an active buff but if Pathfinder Ryder changes weapons to use another weapon, the new weapon buffs are now in place.

Depending upon playstyle, Pathfinder Ryder can have a melee weapon customized with Augmentations that buff all weapons but the melee weapon never actually has to be used during combat. As an added bonus, all melee weapons have no weight and therefore won't impact Recharge Speed.

Retrieved from "https://masseffect.fandom.com/wiki/Weapons_(Mass_Effect:_Andromeda)?oldid=517477"
Community content is available under CC-BY-SA unless otherwise noted.