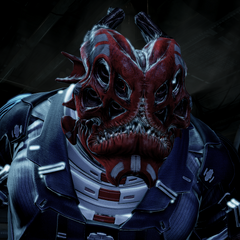 The yahg are a sentient race of towering humanoids native to the world of Parnack, known for their violent and aggressive nature. Consummate predators, the yahg possess unrivaled perceptiveness and mental adaptability. Discovered by the Citadel Council in 2125 CE, the yahg were unceremoniously barred from interaction with Citadel space after massacring the Council's delegation. 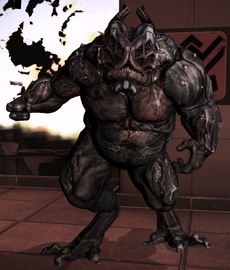 The yahg evolved to fill the niche of apex predator on Parnack. Yahg have four pairs of eyes, each pair designed to track and predict the movements of prey. A keen sensitivity to movement and light allows the yahg to easily read the body language of any species, making it almost impossible to lie to a yahg.

They have scaly, partially armored skin ranging from red to brown, a triangular mouth adorned with sharp teeth, two large horns and facial markings on their heads. Their hands each have three fingers which include a thumb, as well as three toes on each foot.

The yahg possess a large, muscular body, standing over even the krogan, which provides considerable physical strength and agility. Apparently, this wasn't always the case, as the Prothean Javik claims that the yahg were smaller during his cycle 50,000 years ago.

Yahg can live for at least sixty years, judging by the amount of time one spent as the Shadow Broker.

When Parnack was discovered by Citadel Council surveyors in 2125 CE, the yahg were a pre-spaceflight civilization with technology equivalent to that of 20th century Earth. A Council delegation of ambassadors made first contact with the yahg and attempted to establish diplomatic relations. Unfortunately, the yahg perceived the ambassadors' attitudes and behavior as equal individuals instead of subordinates as a sign of contempt, and attacked and massacred the entire delegation. Immediately following that incident, the Citadel Council severed all contact with the yahg and declared Parnack off-limits. The Council maintains that the yahg's aggression and obsession with control make them poorly suited to integrate with the galactic community.

Sometime after the Council's first contact, the Shadow Broker's agents attempted to abduct a yahg for study. Several had to be killed before the agents found one interested in leaving the planet. After impressive displays of intelligence and learning, on par with the much shorter lived salarians, the Broker arranged for the yahg to covertly take the place of one of his operatives and lead strike teams to gather intelligence and neutralize threats.

The yahg's violent nature quickly became a problem and orders were given for him to be eliminated. However, the yahg managed to somehow kill the Shadow Broker in the middle of his message, after which he immediately assumed the role of the new Shadow Broker and rescinded the order to kill him. At this point, none of his agents knew that the previous Broker had been killed and replaced. The yahg remained Shadow Broker for the next six decades, and garnered a fearsome reputation, with many of his agents entering his office and never coming out.

If Commander Shepard was involved, it wasn't until 2185 CE that the true nature of the new Shadow Broker was discovered. Liara T'Soni raided his base in an attempt to rescue Feron, a drell whom the Broker had captured and tortured for an act of betrayal. The Broker did not survive the encounter.

A salarian research facility on Sur'Kesh captured and experimented on several yahg. The salarians planned to secretly uplift the yahg and use them to further their initiatives with full deniability in a similar manner as the krogan. During a Cerberus assault on the STG base, one yahg breaks out of containment and goes on a rampage, killing several Cerberus soldiers. Its fate is unknown.

During the Reaper invasion in 2186, Admiral Hackett mentions that the Reapers have avoided the yahg homeworld of Parnack, apparently because the yahg are a pre-spaceflight civilization. It is speculated that if the Reapers were to succeed in wiping out the current spacefaring races of the galaxy, the yahg might go on to play a prominent role in the next cycle, especially since they have already nearly completed their first spaceship.

Yahg society is built around a pack mentality. A group of yahg will not cooperate until a single leader has attained dominance through either social maneuvering or brute force. Once the leader is established, the defeated yahg do not hold a grudge and former rivals serve their new superior loyally. Due to this mentality, the concept of equality is offensive to them.

Retrieved from "https://masseffect.fandom.com/wiki/Yahg?oldid=516332"
Community content is available under CC-BY-SA unless otherwise noted.