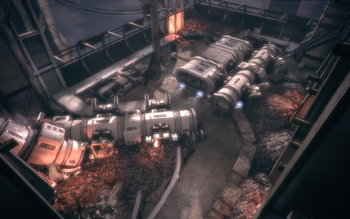 Zhu's Hope is the small settlement and port where Commander Shepard docks upon arrival at Feros. The outpost is built into one of Feros' ancient crumbling skyscrapers and makes use of ancient Prothean water conduits and abandoned hydroponic bays. The colonists sometimes hunt varren for additional food. It functions as ExoGeni Corporation's main port while the larger part of the colony lives closer to the headquarters up the Skyway. Conversation with Fai Dan and Arcelia revals that, before the geth assault, the main colony counted around a thousand inhabitants, while the outpost counted around 200 inhabitants.

Though there are some small shacks around, Zhu's Hope is centered around a crashed freighter called the Borealis. The salarian merchant, Ledra, intended to make a fortune by supplying the fledgling colony, but since the geth attacked Feros, the colonists have mostly been using the ship for shelter.

Zhu's Hope was used as an experimental control group by ExoGeni after the corporation discovered the Thorian below the colony. According to the ExoGeni VI, the last report before the geth attack was that 85% of the colonists were infected with mind-controlling Thorian spores. This infection makes the colonists act strangely and turn violent when Shepard returns from the ExoGeni headquarters.

Shepard's actions determine the fate of Zhu's Hope; if Shepard shoots Ethan Jeong, ExoGeni pull their funding but Zhu's Hope becomes free to grow without their influence. If Shepard can persuade Jeong to use this incident as good publicity, ExoGeni pour the money in and start building Zhu's Hope anew. However, this is dependent on how many colonists survive.

If Shepard killed more colonists than saved through the use of the anti-Thorian gas, the colony on Feros is shut down, with the ExoGeni team and the survivors relocated back to Earth. If more colonists survived than were killed, Zhu's Hope persists. In either case, ExoGeni's stock is reported to rise, with investors pleased that matters upon the planet have been brought to a close. The surviving colonists continue to suffer side-effects from their exposure to the Thorian, and ill-advisedly sign a one-sided agreement with the medical company Baria Frontiers in an attempt to combat their health problems. Shiala, if she survives, appoints herself the colonists' intermediary and travels to Illium to attempt to renegotiate the contract.

Should Shiala and the colony survive the attack in 2183 and assistance is rendered in their medical issues two years later, Zhu's Hope holds out surprisingly well against an incoming Reaper threat to their colony. The lingering hive mind effects of the Thorian spores allow them to coordinate, and also to easily learn combat skills (mainly from Shiala). Their effectiveness in repulsing the initial Reaper threat to their colony allows them time to fully evacuate.

After dealing with Tuchanka and the Genophage, Shepard receives an email from Shiala, who describes the situation and gives Shepard more forces to combat the Reapers. A separate ANN report also makes its way to the Commander's email inbox detailing the colony's actions.

Retrieved from "https://masseffect.fandom.com/wiki/Zhu%27s_Hope?oldid=515930"
Community content is available under CC-BY-SA unless otherwise noted.