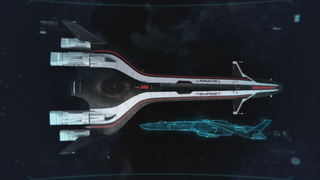 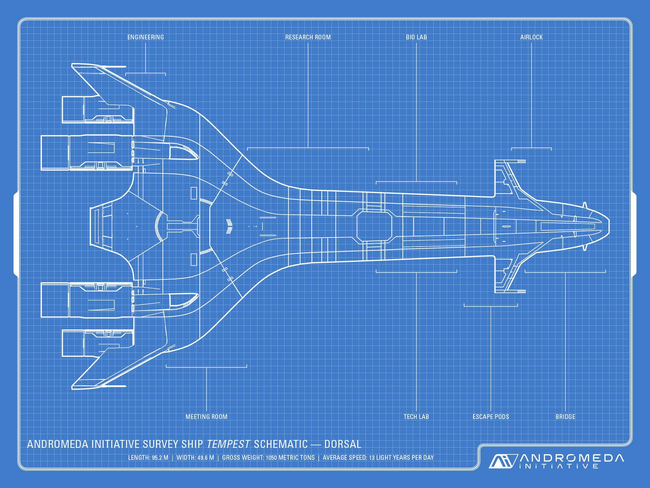 Practical applications of intel and samples gathered like upgrading weapons, armor, and the Nomad ND1 are done in the research room, supported by discoveries from the ship's tech and bio labs. It is situated at the ship's approximate center, between engineering at the aft and the tech and bio labs at the fore.

Technological items are sequestered and studied at the tech lab. It is located just opposite the bio lab in the fore section of the ship.

The bio lab has containment and analysis facilities for biological samples like plants. It is located just opposite the tech lab in the fore section of the ship.

The meeting room, situated toward the upper aft section of the Tempest, is a place to gather the crew or hold video conferences with the Nexus.

Below the meeting room is the engineering room, housing the starship's drive core.

Also below the meeting room is the Pathfinder team's armory, where weapons are stored while off-mission.

Another facility below the meeting room, the med bay has beds armed with a variety of medical equipment to diagnose and treat potential injuries.

The cargo bay houses the Nomad scout rover. It opens up the underbelly of the Tempest to deploy the vehicle or the ground team itself on a ramp.

The crew are housed in wall-set two-man bunks in an area with ample space and greenery.

The Pathfinder's cabin is generally off-limits to the crew unless invited inside. It is the exclusive abode of the ship's commander. Amenities present include a sitting room, a window to (or a projection of) space taking up an entire side, and far larger living quarters compared to the crew's.

This is where the ship's pilot steers the ship and where the Pathfinder operates the nav system, synced specifically to them. The foremost section of the ship, the bridge also has a wide viewing area displaying the universe ahead. 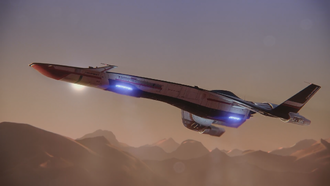 The Tempest is designed to be small, stealthy and fast, trading off heavy armor and a main gun to excel in these. It is capable of covering 13 lightyears per day in FTL. The Tempest's size allows it to land on planets with little trouble, much like the SSV Normandy and unlike the larger Normandy SR-2. Four main thrusters provide its propulsion and it has four additional downward thrusters to stabilize its descent: two below the canard and two below the main wings. It is equipped with an array of scanners for determining groundside conditions before landing.